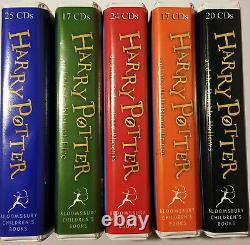 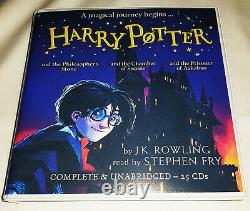 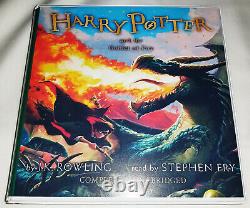 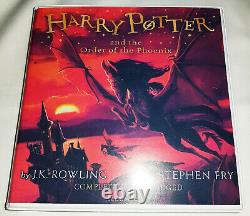 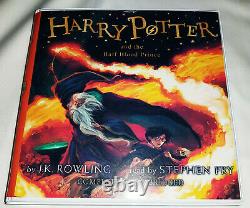 Much stronger ABS case versions which are more durable. Than the flimsy cardboard boxes and will last a lifetime. Harry Potter and the Philosopher's Stone - 7 CD's.

Harry Potter has never even heard of Hogwarts when the letters start dropping on the doormat at number four, Privet Drive. Addressed in green ink on yellowish parchment with a purple seal, they are swiftly confiscated by his grisly aunt and uncle. Then, on Harry's eleventh birthday, a great beetle-eyed giant of a man called Rubeus Hagrid bursts in with some astonishing news: Harry Potter is a wizard, and he has a place at Hogwarts School of Witchcraft and Wizardry. An incredible adventure is about to begin! Harry Potter and the Chamber of Secrets - 8 CD's.

Dobby's sinister predictions seem to be coming true. Harry Potter and the Prisoner of Azkaban - 10 CD's. When the Knight Bus crashes through the darkness and screeches to a halt in front of him, it's the start of another far from ordinary year at Hogwarts for Harry Potter.

Sirius Black, escaped mass-murderer and follower of Lord Voldemort, is on the run - and they say he is coming after Harry. In his first ever Divination class, Professor Trelawney sees an omen of death in Harry's tea leaves. But perhaps most terrifying of all are the Dementors patrolling the school grounds, with their soul-sucking kiss.

Harry Potter and the Order of the Phoenix - 24 CD's. Dark times have come to Hogwarts. After the Dementors' attack on his cousin Dudley, Harry Potter knows that Voldemort will stop at nothing to find him.