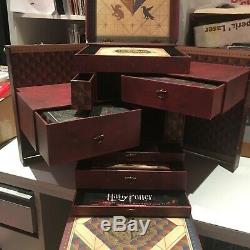 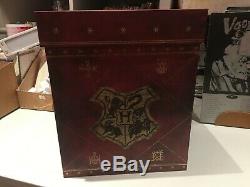 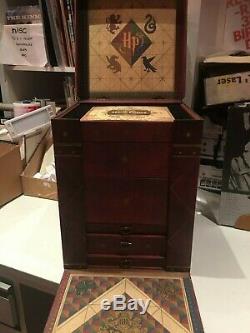 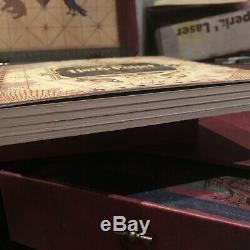 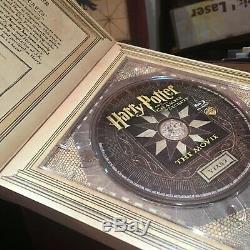 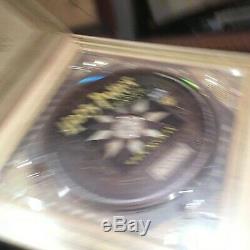 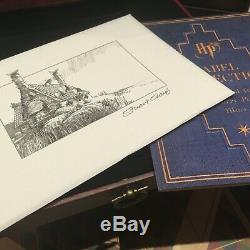 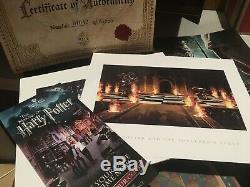 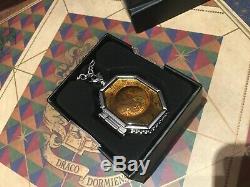 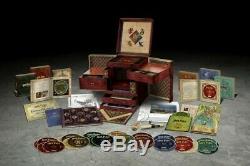 ALL THE DISCS ARE IN VERY GOOD CONDITION - SOME HAVE A FEW VERY LIGHT MARKS, WILL AL PLAY FINE. THE MIRAD OF EXTRAS AND ALL THE PACKAGING IS SIMILARLY IN VERY GOOD CONDITION, A SLIGHT BIT OF WEAR HERE AND THERE AND A COUPLE OF THE BOOX HAVE A SLIGHT BOW TO THEIR COVERS, BUT IN GENERAL IN VERY NICE CONDITION INDEED, AND COMPLETE. AND READ ON BELOW FOR FULL CONTENTS. This is a Region 0 PAL DVD and may not be suitable for some International DVD Players. THIS ITEM IS VERY HEAVY WILL WEIGH OVER 10KG WHEN PACKAGED.

SO IT'S GOING TO COST A BOMB TO POST. (TAKEN FROM AMAZON, AS FAR AS I KNOW THERE IS ONLY ONE VERSION OF THIS BOX SET). The magical film franchise is now available in a spectacular limited-edition collectible box set. The most comprehensive Harry Potter movie collection yet features all eight films, exclusive never-before-seen content and must-have memorabilia. This new limited and numbered 31-disc collection contains all eight Harry Potter movies on Blu-ray, DVD and UltraViolet Digital Copy and more than 37 hours of special features including all previously released materials and more than 10 hours of new to disc bonus content, and 5 hours of never-before-seen material.

Wizard's Collection Exclusive Bonus Disc. How to locate difficult to find items. There is a compartment located at the base of the lid. Open the flap to reveal Catalogue of Artefacts, Cloth Map of Hogwarts and the Blueprint Poster of Hogwarts Castle. The small vertical compartments with checkered pattern and star can be opened by pushing in.

These two compartments contain the Horcrux Locket and Ultraviolet Digital Copy codes. The Bonus disc is located at the very back of the open box. There is a black ribbon in the middle of the checkered pattern that can be pulled.

The back panel can be removed. Bonus disc is located on the backside of this panel. Harry Potter Wizards Collection Bonus Disc. Nearly 4 hours of features including: All New!

The Harry Potters You Never Met - Watch how thrilling stunts from the films were performed, and learn about the tricks behind the major stunts in the series. Harry Potter and the Deathly Hallows Part 1 Bonus Disc. Over 2 hours of features including: All New!

Creating the World of Harry Potter, Pt. Harry Potter and the Deathly Hallows Part 2 Bonus Disc. Over 4 hours of features including: All New! 8: Growing Up and All New! Extended A Conversation with JK Rowling and Daniel Radcliffe with 15 minutes of new footage.

This 32 page, 5" x 7" perfect-bound collection of prop labels from the films was designed exclusively for this collection by MinaLima Design. The book includes labels from potions, memory vials, Honeydukes and Wheasley's Wheezes.

Filled with their favorite props from the films designed in "shadow boxes, " this stunning catalogue can only be found in the. Harry Potter Wizard's Collection.

The item "HARRY POTTER WIZARD COLLECTION COMPLETE DELUXE BLU RAY DVD CHEST BOX" is in sale since Wednesday, February 27, 2019. This item is in the category "Movies\DVDs & Blu-ray Discs". The seller is "dixonsrecords" and is located in Blackburn, VIC. This item can be shipped worldwide.