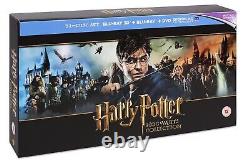 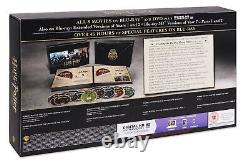 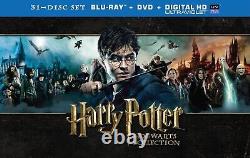 This comprehensive 31-disc collection contains all eight Harry Potter movies on Blu-ray, DVD and UltraViolet and more than 45 hours of special features including the Creating the World of Harry Potter documentary series on Blu-ray. Part 1: The Magic Begins - Explore the early decisions that impacted the entire series, and follow the search for the young leads.

Part 2: Characters - Learn about the casting process and how the actors brought J. Rowling's beloved characters to life.

Part 3: Creatures - Meet a new group of wizards: the artists who created the monsters and marvels in Harry's world. Part 4: Sound & Music - Hear how the composers and sound experts used their craft to magnify the series' emotional journey. Part 5: Evolution - Join the filmmakers as they discuss how the creative vision for the films evolved throughout the series.

Part 6: Magical Effects - Watch how technical wizards conjured up an amazing alternate reality using CGI and practical effects. Part 7: Story - Listen in as J. Rowling and Steve Kloves discuss how the books were adapted for the screen. Part 8: Growing Up - See how the young stars' ideas of acting, fame and themselves have changed over ten years.

Plus a Blu-ray bonus disc with over 3 hours of features including. "The Harry Potters You Never Met" - Meet the stunt doubles for Daniel Radcliffe, Rupert Grint and Emma Watson as they demonstrate how they balanced major stunt work with seamlessly mimicking the actors they represented and share their favorite moments. "Designing the World of Harry Potter" - Explore how production designer Stuart Craig and his creative team brought J.

Rowling's imagination to life on the screen. "When Harry Left Hogwarts" (Extended Version) - Hear candid and emotional stories about the final days on set in this extended behind-the-scenes look.

"50 Greatest Harry Potter Moments" (Definitive Version) - Take a look back with cast members who share their on and off-screen memories. Quidditch - At last, the secrets behind the special effects required for the breathtaking Quidditch scenes are revealed!

Hagrid- See the camera tricks, towering stand-in and voluminous body suits behind the beloved Keeper of Keys and Grounds at Hogwarts. Brand New and Factory Shrink Wrapped / Sealed. Digital HD UltraViolet already expired on 03/04/2016. We are always here to help. Before opening a case, please selecting I have a question about....

There is no reason when doing business with us to have to open a case. Although, there may be an issue (sometimes it's out of our hands), we will do whatever we can within reasonable demands, to make you, our customer, happy! This item is in the category "Movies & TV\DVDs & Blu-ray Discs". The seller is "pbeautyt" and is located in this country: US.