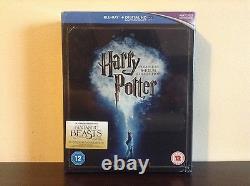 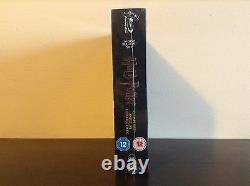 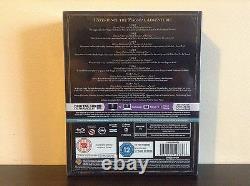 Brand New Factory Sealed Blu-ray Box set. NO DENTS OR SCRATCHES AS SEEN THROUGH THE PLASTIC WRAP. EVERYTHING WE SELL IS COLLECTOR GRADE. MINT CONDITION UNLESS STATED OTHERWISE. The Complete 8-Film Collection (16-discs). Year 1: Harry Potter and the Philosopher's Stone - The magical adventure begins when Harry Potter is to attend Hogwarts School of Witchcraft and Wizardry. Year 3: Harry Potter and the Prisoner of Azkaban - Harry must confront soul-sucking Dementors, outsmart a werewolf and learn the truth about the escaped prisoner of Azkaban - Sirius Black. Year 4: Harry Potter and the Goblet of Fire - Harry must overcome a deadly dragon, fierce water demons and an enchanted maze only to find himself in the cruel grasp of He Who Must Not Be Named.

Year 6: Harry Potter and the Half-Blood Prince - As Lord Voldemort tightens his grip on both Muggle and wizarding worlds, Harry and Dumbledore work to find the key to unlock Voldemort's defenses. Year 7 - Part 1: Harry Potter and the Deathly Hallows, Part 1 - Harry, Ron and Hermione set out to track down and destroy the secret to Voldemort's power - the Horcruxes. On their own and on the run, the three must rely on one another more than ever... But Dark Forces threaten to tear them apart.

Year 7 - Part 2: Harry Potter and the Deathly Hallows, Part 2 - In the epic finale, the battle between the good and evil forces of the wizarding world escalates into all-out war. The stakes have never been higher and no one is safe. But it is Harry who may be called upon to make the ultimate sacrifice as he draws closer to the climactic showdown with Lord Voldemort. This item is in the category "Movies & TV\DVDs & Blu-ray Discs". The seller is "movie_krypto" and is located in this country: US. This item can be shipped worldwide.