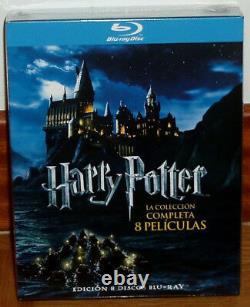 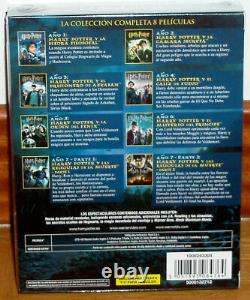 Audio: According to Title (According to Title). Edition: Multi Case Discs: 8. Disc 1: Harry potter and the Philosopher's Stone Harry Potter learns on his eleventh birthday that he is the orphan children of two powerful wizards and that he himself possesses magical powers.

At Hogwarts School of Witchcraft and Wizardry, Harry embarks on the adventure of his life. Learn the sport of Quidditch and participate in an exciting game with live chess pieces on your way to face a dark wizard, bent on destroying you... Because in the second year spiders talk and Harry's incredible gift of understanding the Parseltongue of snakes will make his friends start to doubt him... Disc 3: Harry Potter and the Prisoner of Azkaban As despicable Aunt Marge flies through the dark sky, Harry fears for what must be his third year at Hogwarts. A harrowing ride on the Night Bus takes him to Diagon Alley where he learns that the escaped prisoner, Sirius Black, is coming for him. And so, the new year begins. At Hogwarts, Harry and his companions learn the delicate art of getting close to a Hippogriff, how to transform a Boggart through laughter, and go back in time. The Dementors, terrifying guards of Azkaban, prowl the entire school threatening Harry while a supporter of the unnameable accursed lurks within the castle walls. Harry will be forced to deal with all of them. Directed by Alfonso Cuarón and based on the third novel by JK Rowling, this haunting story is packed with laughter, excitement and the suspense that only the adventures of Harry Potter can bring.

Disc 4: Harry Potter and the Goblet of Fire In Howgarts' fourth year, Harry faces the greatest of his challenges and dangers in the series. When chosen under mysterious circumstances as the competitor to represent Howgarts in the Triwizard Tournament, Harry must compete against the best young wizards from all over Europe. Before you know it, Harry will not only be fighting for the championship, but for his life as well. Disc 5: Harry Potter and the Order of the Phoenix The rebellion begins! When Professor Umbridge refuses to perform defensive magic practices, Ron and Hermione convince Harry to select a group of students and secretly train them for the terrible battle that haunts them.

In this stunning adaptation of JK Rowling's fifth Harry Potter novel, an exciting showdown between the forces of good and evil will unfold. Get ready for the great battle! Disc 6: Harry Potter and the Half-Blood Prince At the age of sixteen, Harry begins sixth grade at Hogwarts amid terrible events that plague England. Chosen captain of the Quidditch team, the practices, the exams and the girls occupy all his time, but the tranquility does not last long. Despite the tight security controls that protect the school, two students are brutally attacked. Dumbledore knows that the moment, announced by the Prophecy, is drawing near when Harry and Voldemort will face each other to the death: The only one with the power to defeat the Dark Lord draws near... One of the two must die at the hands of the other, because neither of them will be able to live as long as the other is alive. The elderly director will request Harry's help, and together they will undertake dangerous journeys to try to weaken the enemy, for which the young wizard will have the help of an old potions book belonging to a mysterious prince, someone who calls himself the Half-Blood Prince. Disc 7: Harry Potter and the Deathly Hallows - Part 1 Harry Potter and the Deathly Hallows, the seventh and final installment in the Harry Potter adventure saga, is divided into two parts.

Part 1 begins as Harry, Ron, and Hermione set out on their dangerous mission to locate and destroy the Horcruxes, the key to Voldemort's immortality. Alone, without the help or protection of their teachers, the three friends must trust each other more than ever. But there are dark forces that threaten to tear them apart.

Meanwhile, the world of magic has become a dangerous place for all the Dark Lord's enemies. The dreaded war has begun and Voldemort's Death Eaters control the Ministry of Magic and even Hogwarts, terrorizing and arresting anyone who opposes them. But the prey they keep looking for is also the most valuable to Voldemort: Harry Potter.

Disc 8: Harry Potter and the Deathly Hallows - Part 2 In the epic finale, the battles between the forces of good and evil from the wizarding world escalate into all-out war. The stakes have never been higher, and no one is safe. But Harry Potter can be called in to make the ultimate sacrifice to get closer to the climactic showdown with Lord Voldemort. Disc 1: Harry Potter and the Philosopher's Stone (Blu-Ray) Director: Chris Columbus.

IN SOUTH AMERICA DVDS ARE REGION "4" AND BLU-RAYS ARE REGION "A". At the age of sixteen, Harry begins sixth grade at Hogwarts amid terrible events that plague England.

The elderly director will request Harry's help, and together they will undertake dangerous journeys to try to weaken the enemy, for. This item is in the category "Movies & TV\DVDs & Blu-ray Discs". The seller is "123enrikez" and is located in this country: ES. This item can be shipped to North, South, or Latin America, all countries in Europe, all countries in continental Asia.