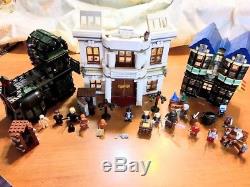 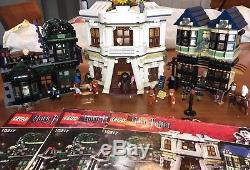 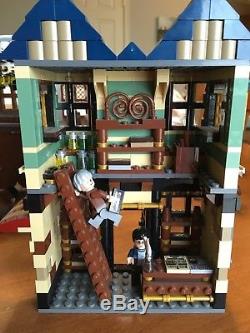 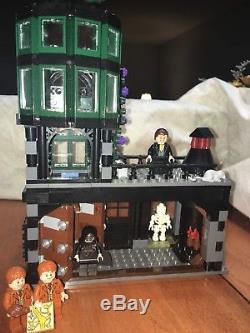 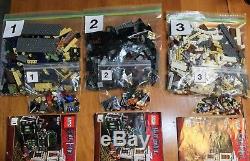 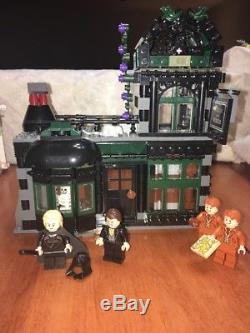 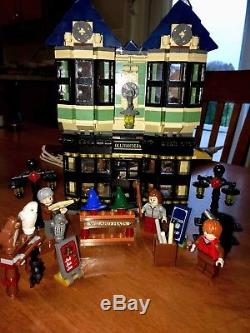 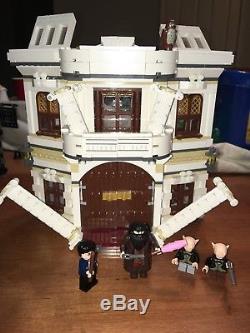 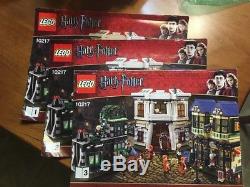 This is a 100% complete set in excellent condition with all minifigures & accessories, as well as all 3 Instruction books. Doesn't come with original box. It was built once for careful display and photographed before disassembly. Pieces were placed in bags sorted according to the 3 instruction books.

All pieces, including mini-figures and accessories, have been carefully checked and accounted for. Instruction Booklets show light wear (with a small tear at the right staple of Book #2).

Diagon Alley is made up of 3 extensively detailed buildings: Ollivanders, Borgin and Burkes and Gringotts Bank! Ollivanders features lots of wands, storage shelves and a step ladder that leads to the top floor! Front desk at Ollivanders has an exploding function! Borgin and Burkes includes a skeleton, glow-in-the-dark elements, fireplace attached to the Floo Network and even a Vanishing Cabinet!

Gringotts Bank is a two-story building featuring large double doors! Open Gringotts Bank completely into one large building and explore inside or close it to create a smaller building! Gringotts Bank features a detailed interior with a removable vault, the Philosophers Stone, clerks desk, chandelier and wonky support pillars!

No need to pass through the Leaky Cauldron. Now even Muggles can shop in Diagon Alley by building this fantastically magical set that includes 3 extensively detailed buildings and 11 minifigures! Join Harry Potter, Ron Weasley and Hermione Granger as they shop for their Hogwarts school supplies. Visit Ollivander's, Borgin and Burke's, and Gringott's Bank. Each Diagon Alley building is realistically detailed.

Ollivander's offers an extensive selection of wands, storage shelves and a step ladder that allows Ollivander to gather wands from the top floor. The front desk has an "exploding" function for those inconvenient times when a spell goes awry. Borgin and Burke's includes a scary skeleton, "glow-in-the-dark" elements, a fireplace attached to the Floo Network and a Vanishing Cabinet that Dark wizards might use to sneak into Hogwarts. Gringott's Bank is an impressive two-story building with large double doors, and can be opened completely into one large building or closed to create one smaller building.