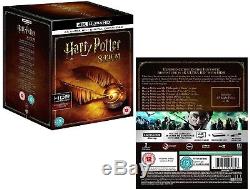 Harry Potter and the Half-Blood Prince. Once again I must ask too much of you, Harry!

This filmed version of Harry Potter and the Sorcerer's Stone, adapted from the wildly popular book by J. Rowling, stunningly brings to life Harry Potter's world of Hogwarts, the school for young witches and wizards. The greatest strength of the film comes from its faithfulness to the novel, and this new cinematic world is filled with all the details of Rowling's imagination, thanks to exuberant sets, elaborate costumes, clever makeup and visual effects, and a crème de la crème cast, including Maggie Smith, Richard Harris, Alan Rickman, and more. Especially fine is the interplay between Harry (Daniel Radcliffe) and his schoolmates Ron (Rupert Grint) and Hermione (Emma Watson), as well as his protector, the looming Hagrid (Robbie Coltrane).

The second-half adventure--involving the titular sorcerer's stone--doesn't translate perfectly from page to screen, ultimately because of the film's fidelity to the novel; this is a case of making a movie for the book's fans, as opposed to a transcending film. Writer Steve Kloves and director Chris Columbus keep the spooks in check, making this a true family film, and with its resourceful hero wide-eyed and ready, one can't wait for Harry's return. Harry Potter 2 - The Chamber of Secrets First sequels are the true test of an enduring movie franchise, and Harry Potter and the Chamber of Secrets passes with flying colors. Expanding upon the lavish sets, special effects, and grand adventure of Harry Potter and the Sorcerer's Stone, Harry's second year at Hogwarts School of Witchcraft and Wizardry involves a darker, more malevolent tale (parents with younger children beware), beginning with the petrified bodies of several Hogwarts students and magical clues leading Harry (Daniel Radcliffe), Ron (Rupert Grint), and Hermione (Emma Watson) to a 50-year-old mystery in the monster-laden Chamber of Secrets. House elves, squealing mandrakes, giant spiders, and venomous serpents populate this loyal adaptation (by Sorcerer's Stone director Chris Columbus and screenwriter Steve Kloves), and Kenneth Branagh delightfully tops the supreme supporting cast as the vainglorious charlatan Gilderoy Lockhart (be sure to view past the credits for a visual punchline at Lockhart's expense). The young, fast-growing cast offers ample compensation, as does the late Richard Harris in his final screen appearance as Professor Albus Dumbledore.

Demonstrating remarkable versatility after the arthouse success of Y Tu Mamá También, director Alfonso Cuarón proves a perfect choice to guide Harry, Hermione, and Ron into treacherous puberty as the now 13-year-old students at Hogwarts School of Witchcraft and Wizardry face a new and daunting challenge. Sirius Black (Gary Oldman) has escaped from Azkaban prison, and for reasons yet unknown unless, of course, you've read J. This dark and dangerous mystery drives the action while Harry (the fast-growing Daniel Radcliffe) and his third-year Hogwarts classmates discover the flying hippogriff Buckbeak (a marvelous CGI creature), the benevolent but enigmatic Professor Lupin (David Thewlis), horrifying black-robed Dementors, sneaky Peter Pettigrew (Timothy Spall), and the wonderful advantage of having a Time-Turner just when you need one. Technically dazzling, fast-paced, and chock-full of Rowling's boundless imagination (loyally adapted by ace screenwriter Steve Kloves), The Prisoner of Azkaban is a Potter-movie classic.

Harry Potter 4 - The Goblet of Fire The latest entry in the Harry Potter saga could be retitled Fast Times at Hogwarts, where finding a date to the winter ball is nearly as terrifying as worrying about Lord Voldemort's return. Thus, the young wizards' entry into puberty (and discovery of the opposite sex) opens up a rich mining field to balance out the dark content in the fourth movie (and the stories are only going to get darker). Mike Newell (Four Weddings and a Funeral) handily takes the directing reins and eases his young cast through awkward growth spurts into true young actors.

Harry (Daniel Radcliffe, more sure of himself) has his first girl crush on fellow student Cho Chang (Katie Leung), and has his first big fight with best bud Ron (Rupert Grint). Meanwhile, Ron's underlying romantic tension with Hermione (Emma Watson) comes to a head over the winter ball, and when she makes one of those girl-into-woman Cinderella entrances, the boys' reactions indicate they've all crossed a threshold. But don't worry, there's plenty of wizardry and action in Goblet of Fire. When the deadly Tri-Wizard Tournament is hosted by Hogwarts, Harry finds his name mysteriously submitted (and chosen) to compete against wizards from two neighbouring academies, as well as another Hogwarts student.

The competition scenes are magnificently shot, with much-improved CGI effects (particularly the underwater challenge). And the climactic confrontation with Lord Voldemort (Ralph Fiennes, in a brilliant bit of casting) is the most thrilling yet. Goblet, the first instalment to get a. The 2 1/2-hour film, lean considering it came from a 734-page book, trims out subplots about house elves (they're not missed) and gives little screen time to the standard crew of the other Potter films, but adds in more of Britain's finest actors to the cast, such as Brendan Gleeson as Mad Eye Moody and Miranda Richardson as Rita Skeeter.

Michael Gambon, in his second round as Professor Dumbledore, still hasn't brought audiences around to his interpretation of the role he took over after Richard Harris died, but it's a small smudge in an otherwise spotless adaptation. Harry Potter 5 - The Order of the Phoenix At last! The fifth Harry Potter film has arrived. The time is long past that this can be considered a simple "children's" series--though children and adults alike will enjoy it immensely.

Starting off from the dark and tragic ending of the fourth film, Harry Potter and the Order of the Phoenix begins in a sombre and angst-filled tone that carries through the entire 138 minutes (the shortest of any HP movie despite being adapted from the longest book). Hopes of winning the Quidditch Cup have been replaced by woes like government corruption, distorted media spin, and the casualties of war. As the themes have matured, so have the primary characters' acting abilities. Ron (Rupert Grint), Hermione (Emma Watson), and especially Harry (Daniel Radcliffe) are more convincing than ever--in roles that are more demanding.

Harry is deeply traumatized from having witnessed Cedric Diggory's murder, but he will soon find that this was just another chapter in the continuing loss he will endure. With no one else to stand against the wicked Death Eaters, the Hogwarts headmaster is forced to revive his secret anti-Voldemort society, the Order of the Phoenix. This welcomes back characters like Mad-Eye Moody (Brendan Gleeson), kind Remus Lupin (David Thewlis), fatherly Sirius Black (Gary Oldman), and insidious Severus Snape (Alan Rickman), and introduces a short list of intriguing new faces.

In the meantime, a semi-psychotic bureaucrat from the Ministry (brilliantly portrayed by Imelda Staunton) has seized power at Hogwarts, and Harry is forced to form a secret society of his own--lest the other young wizards at his school be left ill-equipped to defend themselves in the looming war between good and evil. In addition, Harry is filled with an inexplicable rage that only his Godfather Sirius seems to be able to understand. This film, though not as frightening as its predecessor, earns its.

As always, the loyal fans of J. Rowling's books will suffer huge cuts from the original plot and character developments, but make no mistake: this is a good movie. Harry Potter 6 - The Half-Blood Prince. During Harry Potter's 6th year at Hogwarts, Voldemort is tightening his grip on both the Muggle and wizarding worlds and Hogwarts is no longer the safe haven it once was.

Harry suspects that dangers may even lie within the castle, but Dumbledore is more intent upon preparing him for the battle that he knows is fast approaching. Together they work to find the key to unlock Voldemorts defences and, to this end, Dumbledore recruits his old friend and colleague, the well connected and unsuspecting bon vivant Professor Horace Slughorn, whom he believes holds crucial information.

Emboldened by the return of Lord Voldemort, the Death Eaters are wreaking havoc in both the Muggle and wizarding worlds and Hogwarts is no longer the safe haven it once was. Harry suspects that new dangers may lie within the castle, but Dumbledore is more intent upon preparing him for the final battle that he knows is fast approaching.

He needs Harry to help him uncover a vital key to unlocking Voldemort's defences, critical information known only to Hogwarts former Potions Professor, Horace Slughorn. Meanwhile, the students are under attack from a very different adversary as teenage hormones rage across the ramparts. Harrys long friendship with Ginny Weasley is growing into something deeper, but standing in the way is Ginnys boyfriend, Dean Thomas, not to mention her big brother Ron.

But Ron's got romantic entanglements of his own to worry about, with Lavender Brown lavishing her affections on him, leaving Hermione simmering with jealousy yet determined not to show her feelings. And then a box of love potion-laced chocolates ends up in the wrong hands and changes everything. As romance blossoms, one student remains aloof with far more important matters on his mind. He is determined to make his mark, albeit a dark one. Love is in the air, but tragedy lies ahead and Hogwarts may never be the same again.

Harry Potter 7.1 - The Deathly Hallows pt1 Harry Potter and the Deathly Hallows, the seventh and final adventure in the Harry Potter film series, is a motion picture event, told in two full-length parts. Part 1 begins as Harry, Ron and Hermione set out on their perilous mission to track down and destroy the horcruxes---the keys to Voldemorts immortality. On their own, without the guidance or protection of their professors, the three friends must now rely on one another more than ever. But there are dark forces in their midst that threaten to tear them apart.

Meanwhile, the wizarding world has become a dangerous place for all enemies of the Dark Lord. The long-feared war has begun and Voldemorts Death Eaters seize control of the Ministry of Magic and even Hogwarts, terrorizing and arresting anyone who might oppose them.

But the one prize they still seek is the one most valuable to Voldemort: Harry Potter. The Chosen One has become the hunted one as Voldemorts followers look for Harry with orders to bring him to the Dark Lordalive. Harrys only hope is to find the horcruxes before Voldemort finds him. But as he searches for clues, he uncovers an old and almost forgotten tale--the legend of the Deathly Hallows.

And if the legend turns out to be true, it could give Voldemort the ultimate power he seeks. Harry Potter 7.2 - The Deathly Hallows pt2. Harry Potter and the Deathly Hallows - Part 2 is the final adventure in the Harry Potter film series. The much-anticipated motion picture event is the second of two full-length parts. In the epic finale, the battle between the good and evil forces of the wizarding world escalates into an all-out war. The stakes have never been higher and no one is safe. But it is Harry Potter who may be called upon to make the ultimate sacrifice as he draws closer to the climactic showdown with Lord Voldemort.

Note that goods sent from different countries may have different holidays than Australia. Items that have been correctly described above. Please contact me if the above should occur so that I can try to assist in alternate ways.

The item "HARRY POTTER 1-8 2001-2011 COMPLETE 7 STORIES/8 MOVIES 4K ULTRA HDR R0 BLU-RAY" is in sale since Wednesday, October 10, 2018. This item is in the category "Movies\DVDs & Blu-ray Discs". The seller is "bear_aus_dvds" and is located in Shipping Worldwide from EU.. This item can be shipped worldwide.