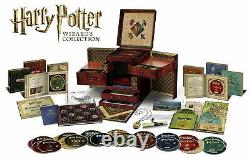 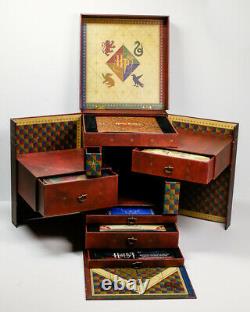 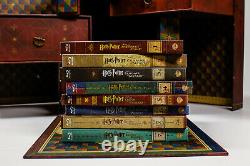 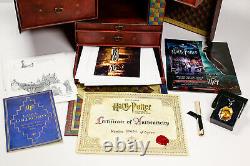 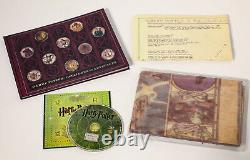 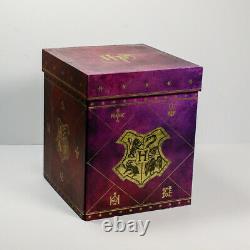 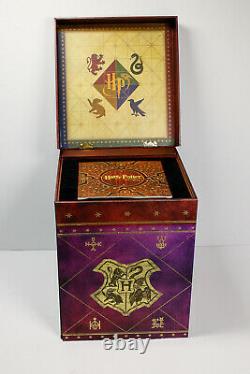 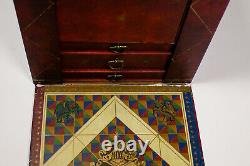 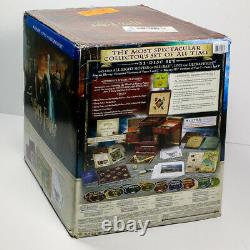 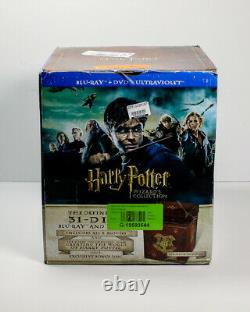 Wizards and witches everywhere will enjoy the all-new documentaries like Creating the World of Harry Potter, Part 7: Story, in which J. Rowling sits down with the series screenwriter Steve Kloves and discusses the process of translating the books to the big screen.

Creating the World of Harry Potter, Part 8: Growing Up incorporates new and vintage interviews with the cast to understand what it was like growing up on the set of the world-famous films, and ends with Daniel Radcliffes emotionally charged farewell speech to the cast and crew. Eight pieces of movie memorabilia, designed exclusively for the.

By the graphic designers from the films, give fans a unique chance to bring the artistic details of the world of Harry Potter into their own home. High-quality concept art prints and a colorful fabric map of Hogwarts and the areas surrounding it are perfect for framing.

The hard-bound Harry Potter Catalogue of Artefacts and the artistic Label Collection offer fans a broad look at the intricate details of each film prop. Also included are a blueprint poster of Hogwarts castle, sketch prints from the production designer, a Horcrux locket prop replica and a certificate of authenticity.

In addition to the theatrical release of all eight films, the collection also includes the extended versions of. Harry Potter and the Sorcerers Stone. And the 3D versions of. Harry Potter and the Deathly Hallows - Parts 1 and 2. Beautifully packaged in a stunning gift box measuring 12-3/4 x 10-9/16 x 11-1/4 and weighing 19 lbs, the. Is the largest collection ever released by Warner Bros. Set Condition: Excellent Pre-Owned Condition. All 31 Discs in flawless mint condition.

100% complete; all exclusive collector's item's are included (Slytherin's Locket, Map of Hogwarts on fabric, Catalogue of Artifacts, Label Collection, Concept Art Prints, Stuart Craig Sketch Prints, Blueprint poster of Hogwarts castle and Certificate of Authenticity). The Scroll with black ribbon containing digital copy is included; but digital copy has been redeemed (so UV digital copy is NOT included). The only condition issues to note is that the paper hinge on the front inside flap of the box has cracked slightly along bottom egde (See picture 8; can definitely be repaired but I didn't want to mess with the integrity of the box). Also there is a small amount of sun fading on the front flap of the chest (see picture 6) from where the sunlight through a window hit the box while on the shelf slight purplish patina...

Learn about the extensive search by producer David Heyman and director Chris Columbus for the perfect actors to portray Harry, Ron and Hermione and see the earliest meeting of Daniel Radcliffe, Rupert Grint and Emma Watson. Be on the scene as imagination and know-how combine to create a look that's distinctly wizardly. From details tiny what about Hermione's buckteeth?

Trace Voldemorts terrifying transformation from grotesque infant-like creature to Dark Lord. Fascinating footage lets you experience the Harry Potter world of creatures through new eyes with this revealing look at a new group of wizards: the artists who create the monsters and marvels. Roam the Creature Shop, where actors turn into beasts and sketches turn into animatronic wonders. Join Daniel Radcliffe, Rupert Grint and Emma Watson as they share stories about acting opposite everything from tiny computer-generated pixies to a four-ton mechanical spider (guess which young star is really afraid of spiders).

Or any Harry Potter film without the iconic Hedwigs Theme? Now, absorbing interviews and behind-the- scenes glimpses let you share the vision of composers, sound experts and others who make the Harry Potter films enchantment for the ears as well as the eyes. Experience sound and music that magnify triumph and fear, joy and suspense while transporting viewers on an emotional journey alongside the on-screen characters. Learn how specially cre- ated musical motifs identify individual characters and places.

Watch as Foley artists use unusual techniques to replicate everyday sounds. Discover a whole new way to look at and listen to Harrys world. YEAR 5 - HARRY POTTER AND THE ORDER OF THE PHOENIX. Creating the World of Harry Potter Part 5: Evolution and additional special features on Blu-ray. Creating the World of Harry Potter Part 5: Evolution. As the eight Harry Potter films trace Harry's journey from innocent schoolboy to selfless hero, the series undergoes a transformation. Evolution - packed with exclusive content - takes you along for every exciting step of the 10-year filmmaking odyssey.

Join the four directors and key members of the crew and cast, including Daniel Radcliffe, Rupert Grint and Emma Watson, as they explore how the creative vision for the films evolved to maintain the integrity and increasing intensity of J. Rowling's expansive literary series. From the ever-changing architecture of Hogwarts castle and growing landscape of the wizarding world, to the darkening palette of each successive film, to the young actors maturing along with their characters, it is a wondrous and spectacular adventure to experience.

In Harry Potter's world, portraits come to life, potions transform, time reverses, Quidditch players soar, dragons attack and magic is everywhere. Explore the moviemaking magic that created the wizardry and wonder of the Harry Potter film series. Now, fascinating insights, interviews and watch-it-happen footage let you experience the triumphs of the technical wizards who conjured up an awe-inspiring alternate reality. Share the fun as Daniel Radcliffe, Rupert Grint and Emma Watson negotiate the moving stairs. Marvel as an oversized water tank transforms into the depths of the black lake for the Triwizard Tournament. Discover which amazing sequence was filmed entirely using computer-generated imagery. Watch as blue and green screen backgrounds transform into towering structures and endless landscapes. You don't know the magic until you've seen Magical Effects. Harry Potter and the Deathly Hallows - Part 1. YEAR 7 - HARRY POTTER AND THE DEATHLY HALLOWS - PART 1. Theatrical version on Blu-ray Maximum Movie Mode Prepare for the Final Battle as Cast and Crew Lead an Interactive Journey to Ready You for the Monumental Last Stand Against Evil All as You Watch the Movie! NEVER-BEFORE-SEEN : Creating the World of Harry Potter Part 7: Story.

Rowling to develop her magical books into films. From the beginning, Kloves had to decide what to keep, what to change and what to cut while staying true to Rowling's vision, initially without even knowing how the series ended! Learn the story behind the stories as they sit down together for an intimate, free-flowing conversation.

Harry Potter and the Deathly Hallows - Part 2. Blowing Up Hogwarts : An Up-Close Look Through the Eyes of the Stars and Filmmakers as You Watch the Greatest Battle Unfold on Screen Including 9 In-Depth Featurettes.

NEVER-BEFORE-RELEASED : Creating the World of Harry Potter Part 8: Growing Up. Additional features include: Harry Potter and the Deathly Hallows Part 2: Behind the Magic A Conversation with J. Rowling and Daniel Radcliffe (Extended Version) Hogwarts' Last Stand (Extended Version) The Women of Harry Potter The Goblins of Gringotts The Great Hall of Hogwarts Ron and Hermione's Kiss That's a Wrap, Harry Potter Neville's Battle Make-up The Gringotts Disguises Harry's Death: The Courtyard Confrontation Secrets of the Cast Revealed! Emma Watson Gets a "Red Card", Daniel Radcliffe Discusses His Mentors, Ralph Fiennes as Voldemort, A Look Back at Severus Snape. The Magic Behind the Movies Revealed: The Secrets of Flight Exclusive Footage from the Harry Potter and the Deathly Hallows Part 2 London Premiere Revealed!

Watch how their ideas of acting, fame, their characters and themselves have changed. Finally, say farewell to the series with Daniel Radcliffe as he delivers an emotionally charged speech to the cast and crew. Harry Potter Wizards Collection Bonus Disc. When Harry Left Hogwarts Extended Version. Hear candid and emotional stories about the final days on set in this extended behind-the-scenes look.

50 Greatest Harry Potter Moments - Definitive Version. Take a look back with cast members who share their on- and off-screen memories as well as their favourite Harry Potter movie moments. Designing the World of Harry Potter. Explore how production designer Stuart Craig and his creative team brought J. Rowling's imagination to life on the screen and how the design evolved over eight films. For the camera and special effects departments, the breathtaking Quidditch scenes required special rigs and the design of hundreds of shots. At last, the secrets behind flying are revealed! For the first time, see the camera tricks, towering stand-in and voluminous body suits behind the character meant to be twice as tall and three times as wide as the average man. The Harry Potters You Never Met. Meet the stunt doubles for Dan, Rupert and Emma as they demonstrate how they balanced major stunt work with seamlessly mimicking the actors they represented, and share their favourite moments. This 48-page rigid book was created by MinaLima Design: Eduardo Lima, Miraphora Mina and Lauren Wakefield, former graphic designers on the Harry Potter films. Filled with their favourite props from the films designed in "shadow boxes, " this stunning catalogue can only be found in the Wizard's Collection.